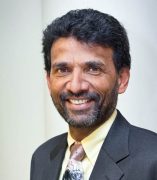 The Microphysics Laboratory (MPL) pioneered the MBE growth, characterization, and device fabrication of HgCdTe and related materials for infrared focal plane arrays. As the Director of MicroPhysics Lab (MPL), my goal has been to form a major center for heteroepitaxy with emphasis on the study of the physics of interface formation. With internal and external support, the MPL has already become such a center for researchers. I was able to increase our funding while several major research centers related to II-VI materials lost a majority of their funding. My ultimate organizational goal is to see the establishment of an interdepartmental, intercollegial Institute or Center for Materials Science and Technology with the emphasis in hetero-epitaxy. I have built research collaborations with national and international universities and institutes. I strongly believe that a close interaction between university and industrial researchers is not only important for moving forward the critical technologies, but also will provide appropriate training for graduate and undergraduate students. My personal research has centered upon the molecular beam epitaxial (MBE) growth of new heteroepitaxial systems under varied growth conditions, their characterization by electrical, structural and optical measurements, and the analysis of the results of these measurements to study the interfacial growth process. For over two decades I have been conducting research in the physics of semiconductors with immediate applicability in infrared (IR) and night-vision detector technology and photovoltaic solar cell technology. Semiconductor heteroepitaxy offers scientific and technological challenges because the two semiconductors on opposite sides of the heterointerface exhibit different lattice parameters, thermal expansion coefficients, and chemical bonding characteristics which can produce an electrostatic charge at the interface. These differences, and hence these challenges, are especially great for the growth of II-VI semiconductors on Si substrates, which have been pioneered by the MPL. The enormity of the difficulty of growing CdTe epitaxially on Si is obvious when one considers that (1) the lattice constants of CdTe and Si differ by 19.3 per cent, (2) the thermal expansion coefficients differ by almost a factor of two, and (3) CdTe has a large ionic component to its bonding, whereas Si bonds purely covalently. Usually, the accommodation of the lattice mismatch is achieved through interfacial dislocations, which are generated at the interface and propagate into the growing crystal. Yet, we have recently been able to reduce the dislocation density in CdTe/Si to 105 cm 2 , approximately the same density found in high quality bulk CdTe. This was achieved by introducing an interfacial layer, such as As, which has allowed the formation of coherent interface. The lattice mismatch was relaxed by almost perfect misfit dislocations. We were able to achieve this by careful understanding of the substrate surface and growth nucleation. At present, MPL is recognized worldwide as the academic center of excellence for the MBE growth of MCT. MPL’s research is focused on the perfection of the MBE growth of MCT, the study of in-situ/ex-situ doping and transport, and the growth of high quality alternative composite CdTe/Si substrates to be used for the growth of large area MCT epitaxial layers.