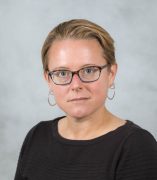 Professor Mills is a member of the CMS collaboration and holds a joint appointment with Fermilab. Her current research interests are measurements of the recently observed Higgs boson, and the connections between the physics of Higgs bosons and the fundamental questions that the Standard Model of particle physics, for all its successes, cannot answer. How did the matter in our universe arise from a matter-antimatter-symmetric initial state? What is the nature of dark matter, for which there is strong observational evidence but which cannot be any known fundamental particle? Can we see evidence of new particles and interactions even beyond the kinematic reach of the LHC through their influence on observable processes? Study of the observed Higgs boson and searches for additional Higgs bosons may hold the key.

The High-Luminosity LHC, scheduled to begin operations in 2026, will let us confront these questions with an unprecedented dataset, nearly 100 times what has been collected to-date. The full potential of this dataset can only be realized with detectors upgraded to handle the corresponding increase in proton-proton interaction rates. To this end, Professor Mills is working on the replacement of the forward pixel detector that will provide precision particle tracking and vertexing in the busy HL-LHC conditions.

Before joining UIC, Professor Mills was a senior research fellow at the University of Edinburgh and a member of the ATLAS collaboration. She led the finalization and publication of the final LHC Run-1 publications for a Higgs boson decaying to two W bosons, including the most precise single-channel measurement of the inclusive Higgs boson signal strength. Prior to that, as a postdoctoral researcher at Harvard University, she contributed to the 2012 Higgs boson discovery and the first measurements of inclusive W boson production at the LHC. As a Ph.D. student at UC Santa Barbara, she measured the top-quark pair-production cross section and studied electron identification performance using Tevatron data as a member of the CDF collaboration.