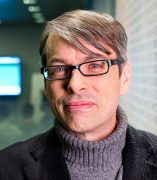 Professor Cavanaugh, specializes in Particle Physics and holds a joint appointment with Fermilab. His current research interests include searching for new fundamental symmetries in nature and possible extra dimensions of space, which may probe the origin of dark matter in the universe. He received his PhD in 1999 from The Florida State University using the ALEPH experiment and the Large Electron-Positron Collider at the European Organization for Nuclear Research (CERN) in Geneva, Switzerland. Continuing his work on ALEPH, he subsequently accepted a post-doctoral appointment at the Universitaet Heidelberg in Germany. In 2001 he joined the research faculty at the University of Florida. There he worked on the Compact Muon Solenoid (CMS) experiment at the CERN Large Hadron Collider, and he coordinated several national initiatives in high performance Grid computing. Before joining UIC and Fermilab, Professor Cavanaugh spent time at the Ecole Polytechnique in Paris as a visiting scientist, investigating Supersymmetry in the context of precision experimental data.