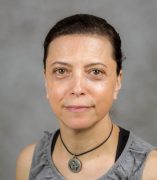 Cells are defined by a membrane, a 4 nm thick film of lipids. Though permeable to small polar molecules, like water, and to small hydrophobic molecules like CO2 and O2, this membrane is impermeable to charged ions and other small molecules. Transport of these molecules are due to proteins that moves them across this barrier. An example is the transport of sodium and potassium in cells, of most significance in neuron signaling. Membranes also define the organelles in Eukaryotic cells and viewing them hosts or scaffold for membrane proteins is simplistic. In the last decade, it was appreciated that lipids mixtures in thermodynamic equilibrium can organize into distinct coexisting lipid phases. This gave rise to the idea that indeed the cell membranes were being organized into lipid phases as well and therefore assisting or adding functionality to the cell. Direct comparison between cell membranes and thermodynamic lipid systems has not been straight forward. The underlying factors that may drive the thermodynamic systems to behave as those found in cells is still under investigation and of active focus in Professor Perez-Salas and her group. Their work consists in detecting nanometer scale phase behavior of thermodynamically equilibrated lipid mixtures using neutron scattering.

As mentioned above, the primary technique used by Professor Perez-Salas' research group is neutron scattering, particularly small angle scattering though neutron reflectivity and spin echo resolved techniques are also being explored. We travel every year to Grenoble France to the Institut Laue-Langevin for at least 3 weeks to perform neutron scattering experiments every summer. We have also traveled to England to the ISIS facility and to Los Alamos in New Mexico for Spin echo resolved measurements. We continue to go to NIST Center for Neutron Research, outside of Washington DC. and in the near future we will be visiting Oak Ridge TN and its High Flux Isotope Reactor. In house, calorimetry is used to determine phase transition properties in lipid mixtures and also microscopy to study structural organization of lipid mixtures in large vesicles, monolayers at the air-water interface using langmuir troughs, as well as supported layers on glass/crystals substrates.

A great collaboration with Distiguished Professor Mark Rasenick's lab and Professor's Perez-Salas Lab recently emerged to study the effect of antidepressants on lipid membranes presenting distinct lipid environments. The hypothesis is that the efficacy of these drugs is in part due to their absorption to membranes as they change the lipid environments in which signaling proteins are found. The Rasenick's lab is extending this hypothesis further and is working on showing that in fact the main affect of these drugs is not through its intended drug target, but rather through its accumulation in membranes.