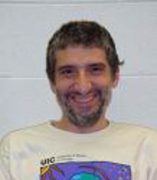 Professor Tom Imbo was born and raised on the near west side of Chicago, where he attended UIC as an undergraduate and received his bachelor's degree in physics in 1986. During this time he published several research papers on non-perturbative approximation techniques in quantum mechanics. After a brief start in graduate school at UIC as the recipient of a University Graduate Fellowship, he moved to the University of Texas at Austin where he received his Ph.D. in theoretical high energy physics in 1988. While at Texas, Tom was again the recipient of a University Graduate Fellowship as well as a Research Assistantship in the Center for Particle Theory. His work there focused on various topics in mathematical physics, and in particular on topological and algebraic aspects of quantum field theory. After spending the 1988-89 academic year at Texas as a postdoctoral fellow, Tom was elected a Junior Fellow in the Harvard University Society of Fellows where he remained in residence until 1992. During these years he continued his studies in mathematical physics and also became interested in the physics of particle-like excitations obeying exotic quantum statistics. The breadth and depth of intellectual interests at the Society of Fellows also spurred his desire to engage in multi-disciplinary work.

In Fall 1992, Tom joined the UIC faculty as an Assistant Professor of Physics, and was promoted to Associate Professor in 1998. As a junior faculty member he surrounded himself with graduate students and postdoctoral fellows, and developed with them an intense intellectual atmosphere for the study of numerous topics in theoretical physics, pure mathematics and the philosophy of science. Also, in 1994 he first obtained financial support for his work from the U.S. Department of Energy, and this funding was renewed annually for the next ten years. Since obtaining tenure, Tom has continued to foster this unique environment and to broaden his intellectual interests, while still remaining committed to a series of long-term studies in mathematical physics that have been ongoing for 20 years. During this time he has been particularly interested in the foundations of quantum mechanics, the physics of time machines, quantum information theory, exotic statistical mechanics, the mathematical theory of knots and links, the representation theory of discrete groups, and issues concerning the notions of "identicality" and "indistinguishability" in physics and philosophy. One recent highlight in this work has been the solution of a 50 year old problem in the statistical mechanics of identical particles obeying parastatistics --- namely, the calculation of the exact Grand Canonical Partition Function for such systems. This calculation is the culmination of a 5 year effort by Tom and his graduate students Randall Espinoza and Mirza Satriawan. He has also recently classified all forms of particle statistics which obey the physical requirements of extensivity and unitarity, and are consistent with the basic tenets of quantum mechanics. This work unifies and extends a great deal of theoretical effort in the field of exotic quantum statistics over the past 25 years. With Paul Lopata, another of his students, Tom has recently proven a 15 year old conjecture on the possibility of quantum cloning in the presence of time machines, and has more generally found ways around the famous quantum "no-cloning" theorems by a judicious use of quantum entanglement. This, along with other results of his group on "generalizations of quantum mechanics" and "superselection rules", may have important applications in quantum computation and quantum information theory, and in the physics of black holes. Finally, a conjecture made by Tom in 2001 concerning the representation theory of the symmetric groups has recently been proven by the mathematician Ernesto Vallejo. This is one of the few known general results about inner tensor products of such representations, and should prove useful in both pure mathematics and theoretical physics. Recently, Tom's diverse work has been rewarded with a substantial financial gift to his research group, extending over the next 5 years with the possibility of extension, made by a private donor.

Over the years, Tom has published approximately 40 scientific papers and given more than 50 invited seminars and colloquia around the country at such places as Harvard University, MIT, Princeton University, the University of Wisconsin at Madison, the University of Illinois at Urbana-Champaign, the University of Texas at Austin, Rice University, Purdue University, Carnegie-Mellon University, Argonne National Laboratory, the University of Wisconsin-Milwaukee, and Northwestern University, as well as numerous presentations in both the Physics and Mathematics Departments at UIC. He has also given "popular lectures" on his physics research to both student groups and high school teachers. Tom has supervised the Ph.D. research of 6 graduate students to date as well as 7 postdoctoral fellows. He has also served on approximately 20 doctoral thesis committees in the physics, mathematics, chemistry and philosophy departments at UIC, as well as numerous other committees whose charge it has been to enhance both the educational and research efforts in the Department of Physics. For the past 14 years he has co-organized the weekly High Energy Physics Seminar which attracts top researchers from the fields of theoretical and experimental particle/nuclear physics to UIC. Along similar lines, Tom has co-organized three international Summer Workshops in High Energy Physics at UIC, and has co-edited the published proceedings of each of these conferences. He is also committed to outreach and has been involved in efforts to attract both undergraduate and graduate students of high quality to come to UIC through his involvement in student fairs, public lectures, the development of recruitment materials and a department newsletter, the UIContest for high school students, the supervision of several ``young summer scholars" from other universities who have visited UIC, and even several performances (as Einstein!) in a physics "play" for freshman and sophomore physics classes.

Finally, Tom is an extremely dedicated classroom instructor having taught courses at all levels, from freshman physics to advanced graduate classes, and having been engaged in curriculum development. In Summer 2006 he will teach a Graduate College Interdisciplinary Seminar entitled "Entangled Identities: Objects, Spaces and Systems in Physics, Philosophy, Architecture (and Beyond)" with Prof. Nick Huggett (Philosophy) and Prof. Ellen Grimes (Architecture). His main goal is to continue to ``live his work" through the never-ending evolution of his local research environment, and an even more intense commitment to teaching both inside and outside the classroom.