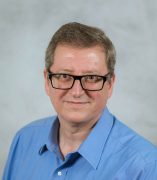 Prof. Hofman's area of scientific research is experimental high-energy nuclear physics, also often called high-energy "heavy-ion" physics. He is interested in creating and studying a new phase of matter, called the "quark gluon plasma", which is believed to have existed at the birth of our universe. This research is carried out at two large colliders, the Relativistic Heavy Ion Collider (RHIC) at Brookhaven National Laboratory in New York and the Large Hadron Collider (LHC) accelerator at CERN in Switzerland.   The experimental nuclear physics group's research at RHIC is carried out within the STAR collaborations and their research at the LHC is carried out within the CMS collaboration.  Professor Hofman was also a member of the PHOBOS collaboration, which measured p+p, d+Au, Cu+Cu, and Au+Au collisions at RHIC, and the E917 collaboration, which measured relativistic Au + Au collisions at 6, 8 and 10.8 AGeV at the AGS.